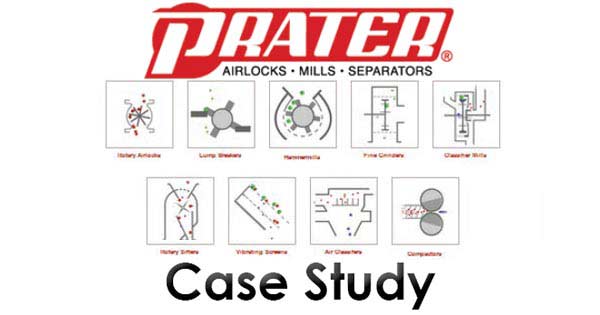 A large flooring manufacturer in Southern Illinois processes many powders including limestone and vinyl to make laminate, vinyl sheet, vinyl tile and linoleum.

For years, the manufacturer used a competitors’ airlock which utilized graphite impregnated aramid fiber packing type shaft seals to feed the vinyl powder from the smaller storage silo into the pneumatic convey line. After only 2 months of service, the 9 PSI internal conveying line pressure would blow out the shaft seals, causing the vinyl powder to leak out onto the ground. After the shaft seals were blown, roughly 50 lbs of powder were lost each day at a cost of approximately $7 to $9 per pound. In addition to the loss of valuable powder, there were safety and material handling issues. Each seal failure resulted in downtime for the production line and constituted end product production loss.

Already utilizing Prater airlocks in various areas of the plant, the manufacturer reached out to Prater. The manager felt confident that Prater would have an answer.

After identifying the problem, Prater supplied a PAV-10 rotary airlock valve with a 10” throat. Praters universal flange is capable of matching most existing bolt hole patterns and allowed for a direct drop in replacement for the existing valve. Praters’ heavy-duty PAV series airlocks come standard with outboard mounted, sealed for life bearings and a fabricated 8 blade open end rotor. The shaft seals utilized were a mechanical style labyrinth Inpro seal which is designed to eliminate shaft seal leakage. Due to the non-abrasive nature of the vinyl powder, a standard cast iron housing with mild steel rotor finished out the valve.

All Inpro products include a stator fixed in place on the valve’s end plate and a rotor pressed onto the valve’s shaft. When put together the two parts form a non-contacting, non-wearing labyrinth seal. To further isolate the product, compressed air is purged into the stator, which when combined with the labyrinth, creates a positive barrier to keep the powder inside the valve.

The company purchased and installed the PAV-10 with the Inpro Seal in March of 2012. Eight months after the seal was installed it continued to operate without seal leaks. When asked about the impact of the improvement, the maintenance manager said the valve eliminated almost $4,000 in wasted product within the first 6 months. The Prater solution also saved nine overtime hours per shaft seal replacement. The flooring manufacturers’ production line now operates more consistently and at a higher capacity with no down time. Overall, the new valve is expected to save the company in excess of $10,000 annually with a return on investment in less than 7 months.

Brent McIntosh is an Outside Sales Manager for Prater. Brent has worked for the company for over 2 years in this position.

Based on your specific application, Prater will recommend a custom solution for you.